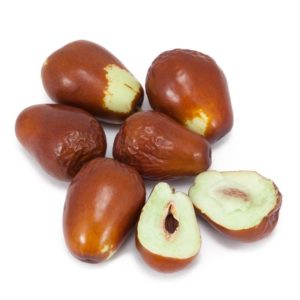 The jujube fruit, the ziziphus jujuba also known as the Chinese date, has potent health benefits. Because jujubes contain a large amount of antioxidants, they can help improve the immune system and overall health. They have a strengthening effect and contain plenty of phytochemicals. Their impressive nutritional content also includes a notable amount of vitamin C, vitamin A and vitamin B2. Jujubes also contain vital minerals, such as manganese, iron, phosphorus and calcium. These elements work synergistically to create general health and well being and bolster the immune system.

Red dates are especially prized by women for their beauty and health effects. As they are very nourishing to the blood they are often eaten by women during their menses and after giving birth. Jujubes are considered and “elixir of life.”

The potent chemical extracted from jujubes, jujuboside A, affects the hippocampus in the brain and is often used as a natural sleep aid. Jujubes can be used to treat both insomnia and anxiety.

Jujube purify the twelve Organ meridians, especially the Stomach, which is the body’s “center” and represents the Earth Element in the Five Phase System. Red jujubes are also said to “clarify the nine openings” including the eyes, ears, sinuses, nose, throat, bowels and urinary tract. They have a long history of being considered excellent at building strength and extending life. In China they are considered able to tonify the Heart, Lung and Stomach functions. They are also said to dry up mucous while simultaneously moistening the tissues.

It is often used in Chinese herbalism as a Yin counterpart to strong Yang herbs such as Ginseng.